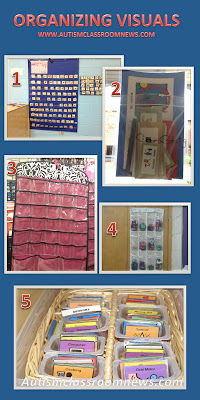 As we all know, classrooms supporting students with autism typically have lots of visuals.  I mean lots and lots and lots of visuals!  Trying to figure out how to store the visuals is always a challenge.  You want them to be easily accessible and you want to be able to find the one you want quickly.  But you also want them organized in some way and out of the way, or they get lost.  With everybody packing up at the end of the year and reviewing how to set up the room next year,  I thought I would share some strategies I’ve seen and used over the years that have worked well.  Sometimes you can keep them in a shoebox and it works.  But when it doesn’t, here are 5 more ideas.
So, how do you organize your visuals in your classroom?

677shares
« I Can Do It Myself! Structured Work System Presentation
Guest Blog from the Dabbling Speechie »