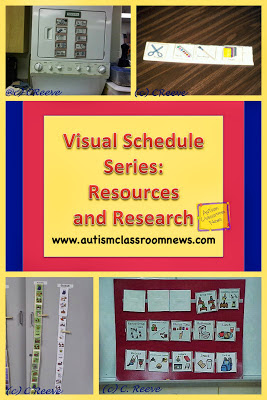 In this post I am going to wrap up the visual schedule series with resources about the research that support the use of schedules and for creating and using schedules.  Several readers have requested information about the research that support the use of schedules.  I started to put something together, but then realized that I really couldn’t surpass what the National Professional Development Center on Autism Spectrum Disorders has put together.  If you haven’t visited their site before, I encourage you to look at the evidence briefs for different interventions.  Be aware that the evidence briefs are only written for interventions that have been shown to have an evidence base.  The NPD indicates that visual supports are an evidence-based practice for early childhood, elementary and middle school ages.  This doesn’t mean that they aren’t effective in high school; it really just means we don’t have enough research on high school aged students and adults to show an evidence base.  The NPD site provides a list of the articles and a summary of the research.  Essentially, they have been shown to be effective in decreasing transition time, improving challenging behaviors, increasing on-task behavior, independence in completing household chores, and to support play skills and social interaction.  More information including steps to using them and an overview of how they can be used can be found here.  The other advantage of pointing you to the NPD site is that they regularly update their literature reviews with new information.

Also, you may want to check out the Autism Internet Modules that has a module on visual supports that has lots of examples and reviews the research.  It is tied into the NPD briefs.  You will need to sign in for a free login but you may be able to get continuing education credit.  They are also a great resource for families. 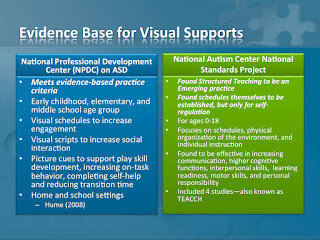 The National Autism Center National Standards Project evaluated visual supports as part of the TEACCH Structured Teaching program.  The TEACCH program includes work systems, arrangement of the physical environment and schedules. They found Structured Teaching to be an emerging practice because there was not enough literature on the program as a whole at that time to raise it to evidence-based.  However, we have more research now on work systems and more on schedules and in the revision that the National Autism Center is working on I would expect to see schedules rise to an evidence-based practice.

So, that’s the research.  Let’s move on to resources to help you use some.

There are visual schedules in my TPT Store

Do2Learn has ideas for schedules and visual supports
Special EducationTechnology British Columbia has visual supports to download
Visual Aids for Learning-has free downloads of visuals
E-Learning from the Geneva Centre has lots of downloadable visual supports.
PrAACtical AAC has done Visual Schedule Roundup of their posts and research
Visual Supports from the Autism Center at UCSD is a handout summary of applications
Autism Speaks Visual Toolkit
HANDS in Autism
Visual Engine–a great site that allows you to create schedule icons and print them

I’m sure there are more out there, so if you have some to share, please do in the comments!  I may add some as I find them as well.